In this post on integrating SigOpt with machine learning frameworks, we will show you how to use SigOpt and XGBoost to efficiently optimize an unsupervised learning algorithm’s hyperparameters to increase performance on a classification task.

As we previously discussed, fully supervised learning algorithms require each data point to have an associated class or output. In practice, however, it is often the case that relatively few labels are available during training time and labels are costly or time-consuming to acquire. For example, it might be a very slow and expensive process for a group of experts to manually investigate and classify thousands of credit card transaction records as fraudulent or legitimate. A better strategy might be to study the large collection of transaction data without labels, building a representation that better captures the variations in the transaction data automatically.

Unsupervised learning algorithms are designed with the hope of capturing some useful latent structure in data. These techniques can often enable dramatic gains in performance on subsequent supervised learning tasks, without requiring more labels from experts. In this post, we will use an unsupervised method on an image recognition task posed by researchers at Stanford1 where we try to recognize house numbers from images collected using Google street view (SVHN). This is a more challenging problem than MNIST (another popular digit recognition dataset) as the appearance of each house number varies quite a bit and the images are often cluttered with neighboring digits: 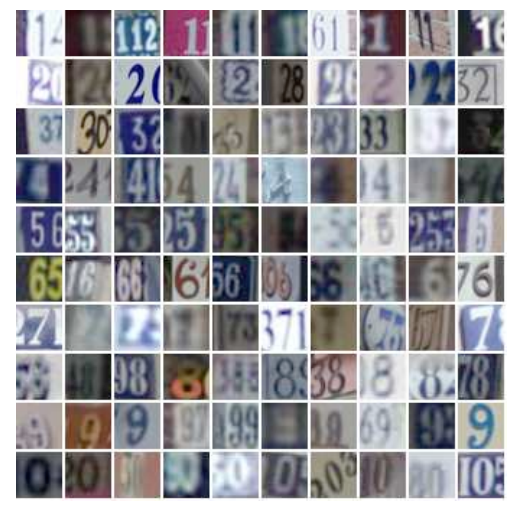 Figure 1: 32×32 cropped samples from the classification task of the SVHN dataset. Each sample is assigned only a single digit label (0 to 9) corresponding to the center digit.2

In this example, we assume access to a large collection of unlabelled images \(X_u\) where the correct answer is not known and a relatively small amount of labeled data \((X_s, y)\) for which the true digit in each image is known (often requiring a non-trivial amount of time and money to collect). Our hope is to find a suitable unsupervised model, built using our large collection of unlabelled images, that transforms images into a more useful representation for our classification task.

Data scientists use their domain knowledge to select appropriate unsupervised and supervised models, but the task of selecting the best parameters for these models is often daunting and non-intuitive. Even simple unsupervised models—such as the whitening strategy we discuss below—often introduce tunable parameters, leaving potentially good models on the table simply because a winning configuration was never found.

SigOpt offers Bayesian optimization as a service, capable of efficiently searching through the joint variations \((\lambda_u, \lambda_s)\) of both the supervised and unsupervised aspects of machine learning systems (Figure 2.) This allows experts to unlock the power of unsupervised strategies with the assurance that each model is reaching its full potential automatically. The gains achieved by methods like SigOpt are additive with feature engineering, allowing for better results and faster iteration with less trial and error.

A simple but surprisingly effective transformation for small images was proposed in a paper by Coates where image patches are transformed into distances to (\K\)  learned centroids (average patches) using the k-means algorithm, and then pooled together to form a final feature representation as outlined in the figure below:

Figure 3: Feature extraction using a w-by-w receptive field and stride s. w-by-w patches separated by s pixels each, then map them to K-dimensional feature vectors to form a new image representation. These vectors are then pooled over 4 quadrants of the image to form classifier feature vector.

In this example we are working with the 32×32 (n=32) converted gray-scale (d=1) images of the SVHN dataset. We allow SigOpt to vary the stride length ( \(s\) ) and patch width ( \(w\) ) parameters. The figure above illustrates a pooling strategy that considers quadrants in the 2×2 grid of the transformed image representation, summing them to get the final transformed vector. We used the suggested resolution in and kept pool_res fixed at 2. \(f(x)\) represents a \(K\) dimensional vector that encodes the distances to the \(K\) learned centroids, and \(f_i(x)\) refers to the distance of instance \(x\) to centroid \(i\). In this experiment, \(K\) is also a tunable parameter. The final feature representation of each image will have \(J = K * \text{pool_res}^2\) features.

Before generating the image patch centroids and any subsequent patch comparisons to these centroids, we apply a whitening transform to each patch. When dealing with image data, whitening is a common preprocessing transform which removes the correlation between all pairs of individual pixels4. Intuitively, it can be thought of as a transformation that highlights contrast in images. It has been shown to be helpful in image recognition tasks, and may also be useful for other feature data. The figure below shows several example image patches before and after the whitening transform is applied.

Figure 4: Comparison of image patches before and after whitening5

The whitening transformation we use is known as ZCA whitening6. This transform is achieved by cleverly applying the eigendecomposition of the covariance matrix estimate to a mean adjusted version of the data matrix, so that the expected covariance of the data matrix becomes the identity. A regularization term \(\epsilon_{\text{zca}}\)  is added to the diagonal eigenvalue matrix, and  \(\epsilon_{\text{zca}}\) is exposed as a tunable parameter to SigOpt.

Each whitened patch in the image is transformed by considering the distances to the learned \(K\) centroids. To control this sparsity of the representation we report only distances that are below a certain percentile, \(\text{sparse_p}\), when considering the pairwise distances between the current patch and the centroids. Intuitively this acts as a threshold which allows for only the “close” centroids to be active in our representation.

The figure below illustrates the idea with a simplified example. A whitened image patch (in the upper right) is compared against the 4 learned centroids after k-means clustering. Here, let’s imagine we have set the percentile threshold to 50, so only the distances in the lower half of all centroid distances persist in the final representation, the others are zeroed out

Figure 5: Sparsity transform; distances from a patch to centroids above 50th percentile are set to 0

While the convolutional aspects of this unsupervised model are tailored to image data, the general approach of transforming feature data into a representation that reflects distances to learned archetypes seems suitable for other datasets and feature spaces7.

We consider the popular library XGBoost as our gradient boosting implementation. Gradient boosting is a generic boosting algorithm that incrementally builds an additive model of base learners, which are themselves simpler classification or regression models. Gradient boosting works by building a new model at each iteration that best reconstructs the gradient of the loss function with respect to the previous ensemble model. In this way, it can be seen as a sort of functional gradient descent and is outlined in more detail below. In the pseudocode below we outline building an ensemble of regression trees, but the same method can be used with a classification loss function \(L\) To compare model performance, we use accuracy, which can be understood as a measure of the probability of correctly classifying for each image in the test set. For example, a model that correctly recognizes the house numbers for 91% of the images would result in an accuracy score of 0.91.

We compare the ability of SigOpt to find the best hyperparameter configuration to the industry standard methods of random search, which usually outperforms grid search and manual search8 and a baseline of using an untuned model.

Because the underlying methods used are inherently stochastic we performed 10 independent hyperparameter optimizations using both SigOpt and random search for both the purely supervised and combined models. Hyperparameter optimization was performed on the accuracy estimate from an 80/20 cross-validation fold of the training data (73k examples). The ‘extra’ set associated with the SVHN dataset (530K examples) was used to simulate the unlabelled data \(X_u\) in the unsupervised parts of this example.

After hyperparameter optimization was completed for each method we compared accuracy using a completely held out dataset (SHVN test set, 26k examples) using the best configuration found in the tuning phase. The holdout dataset was run 10 times for each best hyperparameter configuration for each method, the mean of these runs is reported in the table below. SigOpt outperforms random search with a p-value of 0.0008 using the unpaired Mann-Whitney U test.

Unsupervised learning algorithms can be a powerful tool for boosting the performance of your supervised models when labeling is an expensive or slow process. Tuning automatically brings each model to its full potential. SigOpt was built to help with this non-intuitive task. As this example demonstrates, careful parameter tuning can enable engineering and data science teams to better leverage their unlabelled data and build more predictive data products in less time and lower cost. Sign up for a free evaluation today and get the most from your models!

SigOpt effectively optimizes machine learning models across a variety of datasets and algorithms. See our other examples:

Establishing a robust pipeline for successful models requires more than a Jupyter notebook and a GPU instance.